News
Commonwealth Games: Strong finish for Jersey’s stars down under 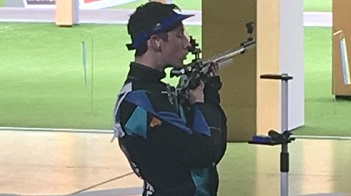 
The president of the Commonwealth Games Association of Jersey has declared himself “happy with the majority of the results” at Gold Coast 2018, but insisted there should be no complacency as the Games came to a close over the weekend.

Team Jersey will leave Australia without a medal, but with so many inspirational performances behind them.

It was a strong finish to the Games for Jersey, with shooter Cameron Pirouet coming closest to a medal with a fourth-placed finish in the 50m Rifle three position event. 19-year-old Pirouet (pictured) was then chosen as flag-bearer for the closing ceremony – a brilliant moment for the youngster.

“I think we should feel happy with the majority of the results,” said CGAJ president Paul du Feu. “We should not be complacent but just over half the key events we competed in produced a good placing or standard times. The CGAJ have been collecting data and statistics since the 2006 games and are able to measure their percentages off gold as well as their placings and then compare and contrast these with the past 3 games performances.

The small bore shooters headed the successes with Cameron Pirouet’s excellent three position shoot. Our experienced full bore team were so near once again with Barry le Cheminant nearer than anyone has been in the past three Games and David le Quesne only 0.1% behind. Shooting has been fully supportive of our ACORN pathway programme and have reaped their rewards.”

Elsewhere on the final day of sporting action for Jersey, cyclist Kim Ashton came 20th in the road race, with Helen Ralston in 31st. Dan Halksworth was the pick of the male riders, in 45th spot.

“Our male cyclists – Jack Rebours and Dan Halksworth – had the best results in recent Games in the time trial as did Rhys Hidrio in the mountain biking. Dan then added a superb road race. The ladies were not to be outdone with Kim Ashton’s road race exceptional and Helen Ralston finishing well,” added du Feu.

“The Jersey team competed in 31 measurable events over the 11 days of competition with 10 finishing in the top half of the field and over half meeting their targets. There will always be disappointments and lessons to be learned but I feel we can honestly say that Jersey has had a good Games.”

Then, Jersey girl Serena Guthrie topped off a memorable few weeks, as England won netball gold in remarkable fashion with a last second goal giving them the victory over hosts Australia.

BEST DAY OF MY SPORTING CAREER. I left home at 16 to persue this dream. Today I lived my dream. It was MAGNIFICENT ⚘ to all those supporting us THANK YOU … YOUVE BEEN SENSATIONAL ❤ #GOLDENROSES ???????????????? #GOLDCOAST2018