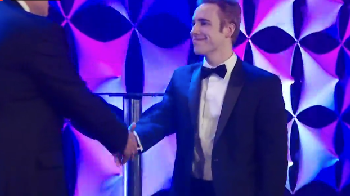 
Jersey’s sportsmen and women were among those reflecting on the past year of achievements at the Betway Channel Islands Sports Awards last night, with Jersey competitors winning three of the six honours.

While Guernsey’s Commonwealth Games-bound fighter Billy Le Poullain was crowned Sports Personality of the Year, there was still plenty for Jersey’s stars to celebrate.

Alex Buesnel (pictured with thanks to ITV Channel) was recognised with the Michael Lucas Sporting Hero Award after a year in which he became the first disability competitor to represent Jersey at an Island Games. Not only that, but he returned from Gotland with a team silver medal and narrowly missed out on an individual bronze.

Meanwhile, Jersey and England international netballer Serena Guthrie won the Judges Award and Jersey Reds took the Team of the Year trophy, after reaching the final of the British and Irish Cup in 2017 and narrowly missing out on a spot in the Greene King IPA Championship play-offs.

First up is the Judges Award for Achievement, which goes to the magnificent Serena Guthrie (@serenabob). Many congratulations Serena! #CISPOTY pic.twitter.com/ztnR3DyWgi

Jersey Sport CEO Catriona McAllister was on the nominee shortlisting panel for the awards and was in attendance at Beau Sejour in Guernsey for the ceremony, which was shown live on ITV Channel.

There were a record number of votes.

Waves Team of the Year

Source Recruitment Coach of the Year