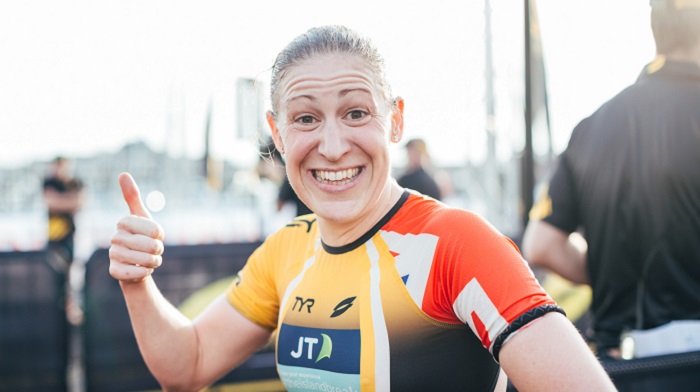 The Super League Triathlon will take place in Jersey on 29th and 30th September 2018. It’s a major event on the world’s sporting stage, bringing 50 of the world’s best triathletes, including numerous Olympians, to the Island to compete. Alongside the professional races this year will be a chance for the public to also take part in the Age Group races. There are limited spaces and sign up is available now online.

Commonwealth Games gold medalist and runner up for the World Triathlon Series 2013, Jodie Stimpson, will be competing in Jersey in September 2018. She is a tough, super competitive and fearless triathlete that is inspiring women and girls all over Britain to embrace the sport.

Jodie wants more women to give the triathlon in Jersey a try this year. She says: ‘For me I don’t think there are many other sports which are so welcoming no matter your gender or capability – from first timers to elites. It’s a special thing to share the love of triathlon, which I’m sure you will get addicted to once you have done just one!’

She continues: ‘I feel very lucky and extremely grateful that I get to do what I love the most every day, being able to have it as my career is the most precious thing. It’s of course a huge part of my life and in turn my family’s life but it gives us an amazing bond. I’ve seen some fantastic places and met some absolutely brilliant people. I have a huge extended family thanks to triathlon!’

Age Group participants can race the same course as Jodie this year in the Super League Age Group races. They are open to all with individual men’s and women’s events, alongside thrilling mixed relays. People who are new to triathlon can try the Super Sprint race of a 400m swim, 10k bike and 2.5k run. Those who want to be even more ambitious can try the Enduro race, which does the same format twice and back to back. The individual and relay races will take place on the morning of Sunday 30th September giving the participants enough time to smash the course, get some recovery and settle in to watch the pros in the afternoon. Each participant will receive a Super League Triathlon goodie bag, finishers medal and be invited to attend an awards ceremony.

Michael Dhulst, CEO and co-founder of Super League Triathlon, says: ‘This year we are giving every fan the opportunity to ‘race like a pro’, whether you are an experienced athlete or absolute beginner, this is your chance! The offerings across the Super League weekend in Jersey are more than simply signing up for a race, you’ll be signing up for a true triathlon experience for yourself, your family and your supporters.

‘I am so grateful to Jodie Stimpson for being such a great ambassador for the sport and encouraging more women to take part. Triathlon has changed Jodie’s life and that of her family who are a huge support. She is a great example to both women and men – she is super tough, super competitive and never lies down. The perfect formula for racing in the Super League.’